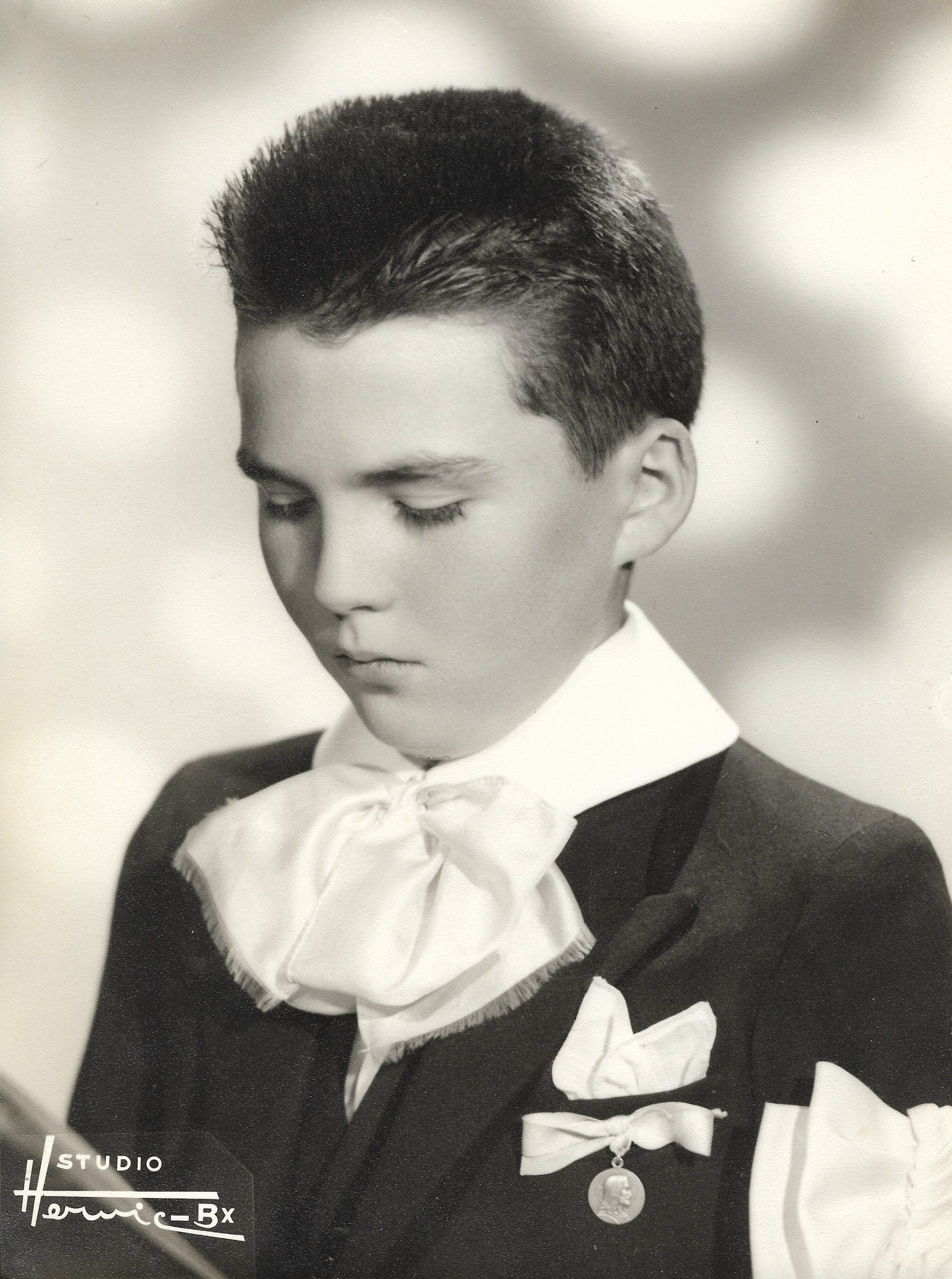 I spent the summer of 1954 getting ready to go to boarding school in Caudéran, a suburb of Bordeaux.  The school, named École Sainte Marie Grand Lebrun, was a Marianist order school.  I watched my mother delicately sewing my initials and my school identification number “616” on my clothing.  I also practiced conjugating Latin verbs to give myself a head start.

Finally, the important day arrived:  it was time to depart for Grand Lebrun.  I was anxious and excited to be in the school with Bernard, my brother five years older.  I vividly remember my mom helping me find my desk in the huge study.  Besides studying French, history, geography, and math, we were introduced to Latin and English.  Because it was a Roman Catholic school, we also had religion classes three times a week.  The strict discipline began at 6:30 in the morning and was not over until 9:30 at night.

I quickly got into trouble with the discipline and quality of my academic work.  Every Friday morning, the principal, a priest, came into the classroom to deliver the grades.  Students with disciplinary infractions spent Sunday afternoon between one and four o’clock in the study hall.  After two long months, I got to go home for a church holiday, Toussaint or All Saints Day.

Bernard was in a different section of the school and I hardly interacted with him. Very proficient in math and physics, he moved the next year to a more scientifically advanced school; my parents were pushing him to earn an engineering degree from a prestigious college. Bernard’s love of soccer prevented his academical success. He regularly played for the “Girondins,” Bordeaux’s main soccer, sometimes as a starter for the professional team, making sure my parents did not know about it.

In my final years in Bordeaux, not only did I play for the school soccer team on Thursdays, but also for a club team on Sundays. My parents were vaguely aware of it but did not care, and certainly did not offer any help in rides or giving me a new pair of cleats. It was total independence, but expectations were high to excel academically.

At that time, my maternal grandfather, Camille, came to live with us.  I have fond memories of him, observing nature, studying the ecology around us.  I, too, loved being in the country, exploring all the life around me—birds, animals, blooming flowers.  Fresh fruit abounded and I enjoyed eating the strawberries, cherries, peaches, pears, and apples from the orchard and the ripening grapes in the vineyard surrounding the house.

Those school years were a struggle for me.  I felt a lot of pressure to excel academically, but since I failed to adapt to the strict rules, I was always in trouble.  Athletics, on the other hand, were successful for me.  I was a strong soccer player, a leader on the field.  One year our team was named the best private high school team in the country.  I ran track, did high jump and long jump, and always participated and earned medals in the national tournament.

My parents, however, were interested only in my grades.  When I was a young teen, my father would ask, “What are you going to do when you grow up?”  “I don’t know,” I would say, which meant it was time for a lecture.  My dad’s stature made me feel small, and I was intimidated by his accomplishments in spite having only a local elementary school education.

One Saturday morning, as the daytime students were going home, I was called to the front of the school. My father was there and as I approached him to greet him the usual way, by a kiss on both cheeks, he slapped me as hard as he could on both sides of the head. He walked away saying, “You know what I mean.” He took the time to drive to Bordeaux to teach me a lesson. But I kept getting into trouble, and not going home on most weekends.

My dad had quite an extensive wine collection. On Saturday nights, specially if guests were part of the traditional Sunday lunch, we will go with my dad to the cellar to select the wines. My brothers and I listened to my dad talking about his impression about the different Chateaus but also other subjects. He had so much knowledge with an astonishing memory. Eventually my mom would come over, announcing it was time to go to bed. Rare times to enjoy being around my dad.

At the end of one school year, the day before the Brevet, a state-sponsored exam, I was out of control for some reason and jumped on the back of the staff member in charge of discipline, kicking him. Then I ran upstairs, grabbed a sheet off my bed, threw all my clothes in it, and tied it. I burst into the principal’s office, angrily swearing, and ran away from the school with my stuff.  I went to my aunt’s house and took the exam for the next two days. Luckily, my parents were traveling. My sister was contacted and she never told my parents. Surprisingly, I was allowed to go back to Grand Lebrun the next fall.

Our family never went on vacation.  During the summers home from school, I spent the mornings doing jobs around the house; in the afternoons, I played tennis.  Most days my friend Philippe and his brother Michel, sons of the pharmacists in Rauzan, came on their bikes and we played all afternoon.  When I was 12, my uncle Charles gave me a real leather soccer ball.  Philippe and I would practice our soccer skills, sometimes joined by my brother Bernard.  My dad was gone at work and my mom left us alone.

My mom promised me to buy a mobylette, a small scooter, if I passed my brevet, a national exam.  I succeeded, got my moped, and started to have a lot more freedom.  I was 16.  Two years later I succeeded in receiving the first part of the baccalauréat.  The following year I failed the second part.  So plans were drawn up for me to repeat my last year of high school in London, at the French high school, then go to the University of California in Davis to study pomology, or fruit growing.

Only years later did I realize that I did not belong in this family structure and I had to go. I am glad I left.