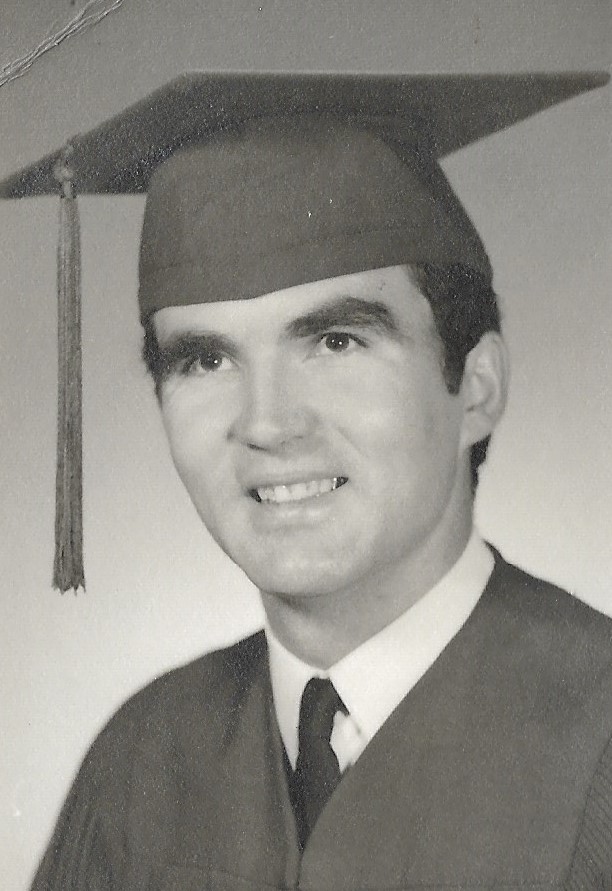 My senior year in college turned out to be very enjoyable.  I developed strong friendships with a couple of classmates in my field.  I really liked my course work and I knew then it was my calling to work in orchards or vineyards.  For the first time, I was getting good grades and
contemplating graduate school.

Mary always dreamed of flying.  Her dad, Captain Robert Stewart, a retired pilot for American Airlines, encouraged her to be a flight attendant.  She moved to Dallas to train.  He flew there to attend her graduation and proudly pin the wings on her uniform.

Mary was assigned to JFK airport, so I flew to New York City to visit her at Christmas time.  We had a wonderful time, exploring the city, even going to upstate NY to spend a couple of days in a ski resort.  We knew then we would get married.

Back in Davis, I wrote to my parents telling them of our intentions.  My mom ordered a ring for Mary and my father arranged a work trip to New York to bring it to her.  Mary asked her mom to join her and the two of them met my dad for dinner at his hotel.  Later that evening, all
excited, Mary called to tell me how beautiful the ring was and how pleasant the evening had been.  I was engaged—and I was not even there!

From time to time, Mary would have a flight to SFO and we always had a wonderful time planning our future together.  After graduation, I was immediately admitted into a master’s program, and I secured a research lab position in the Pomology department for the summer.  Mary was planning the wedding with her mom in Los Angeles.  I had no idea what the preparations were about, but I was so excited!  The date was set:  September 7, at Corpus Christi Catholic Church in Pacific Palisades.

My parents arrived a week early, by way of San Francisco.  I took them to farms where new harvest techniques were developed.  We watched the mechanical harvest of canning tomatoes with a substantial amount of waste, and the shaking of peach trees where the fruit destined to be canned collected into a big cone.  Finally, my mom declared, “I saw enough!”  Of course, they were raised in a culture where everything is done by hand and there is certainly no waste.  We left on Thursday and drove to LA in two days, taking the scenic route along the Pacific coast.  We arrived at Mary’s parents’ house a day before the wedding.  Shortly after meeting Mary, my mom took me aside and asked, “Does she have longer dresses?”  It was the time when “mini skirts” were in fashion but not in Rauzan, France!

My parents and I met everybody in front of the church.  Mary’s two brothers and three of my college friends went to the altar and soon Mary appeared with her dad, who had contracted polio but still managed to walk her down the aisle.  It was a beautiful ceremony, officiated by a priest friend of the bride.  The reception took place at her parents’ home, under the clear, Southern California blue sky.  Mary’s dad, a very gifted craftsman, managed to expand the dining room to the back patio.  Everything was perfect!  Even my father remarked, “I should have invited the French Consul of Los Angeles.”

The next day we took my parents to the airport to fly home.