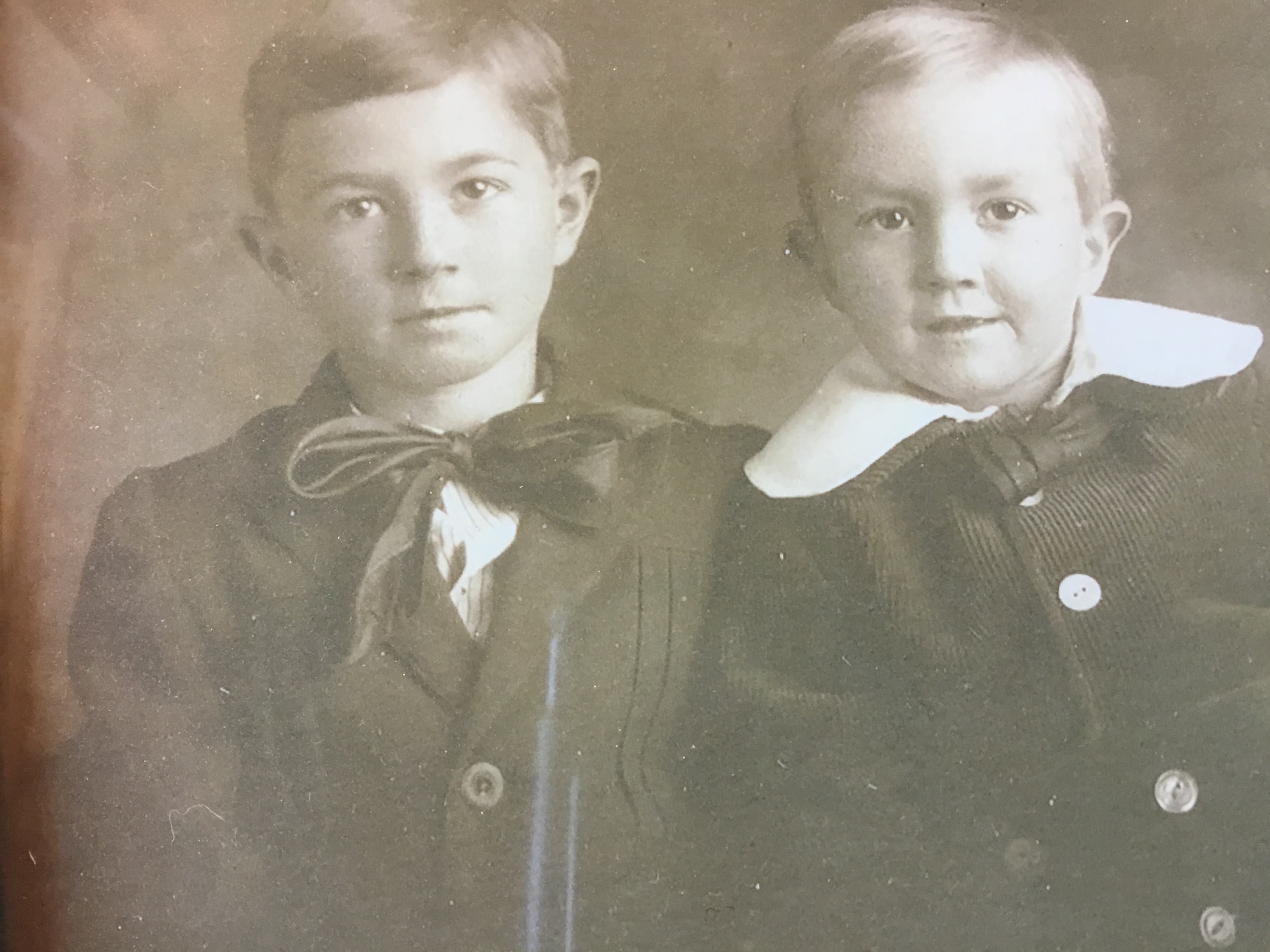 My grandfather (my father Earl’s father), Robert Allison Woodall was born in Gladstone, Ill. March 16, 1887. His parents were Robert Allison Woodall, who was born in Yorkshire, England in 1830, and Nancy Francis Schull who was born in Kentucky April 3, 1850. My grandfather went by the name of Bob but I think up until the time he got married he went by the name of Allie. Bob’s father Robert came to America from England in 1860.

Two years before this in 1858 Robert’s mother (name unknown), a sister Mary, a sister Jane, and a brother (name unknown) came to America. Robert’s father stayed in England because it is said he was afraid to cross the ocean. Nancy Francis Schull was the daughter of Phillip Schull. Her family moved from Kentucky in 1860 and settled in Henderson County, Illinois. Robert Allison Woodall and Nancy Francis Schull were married in 1869 at Canton, Ill.

To this union were nine children. Robert died in April, 1899 and Nancy died in 1925 and is buried in Olean, Ill. Robert was a teacher and a farmer but not a very good farmer. Nancy was a quarter Sioux Indian. My uncle Fred (Earls brother) told me he remembers his grandmother (Nancy) coming by train to Kansas for a visit when he was about 6 or 7 years old. She raised so much hell with everyone while there that Bob loaded her up after a few days and sent her home by train. Fred didn’t know why she was on the war path. 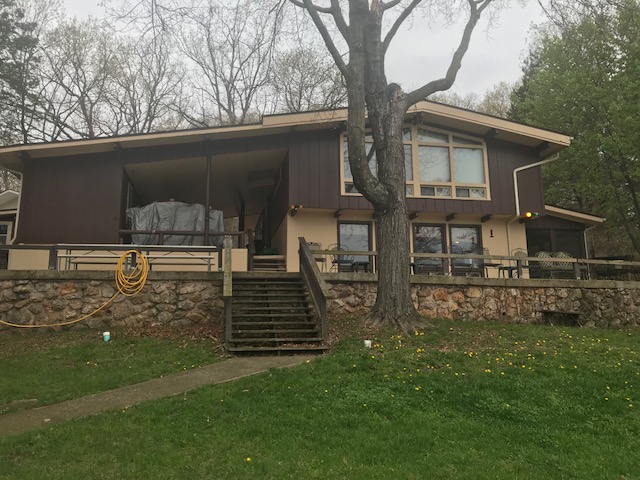 In 1993, Jim and I purchased our home on the Lake of the Ozarks.  We looked at several areas of the lake, and visited with friends who lived there.  We knew we wanted a place close to the water, with a great view.  Our location on Prestige Drive offered both of these – a home close to the water and a location at the intersection of the Little Niangua and the Big Niangua branches of the Lake of the Ozarks.

The house needed a lot of work.  It had been built as more of a fishing cabin.  There was no insulation, no central air conditioning.  There was a room air conditioner above the front door (now replaced by a hummingbird stained glass window) that didn’t do a very good job of cooling the house.  The small windows below the big picture windows in the living room cranked open, and leaked air so we had to cover them with plastic in the winter.

Over time, we have installed central heat and air, added insulation to the ceiling by adding another roof eight inches above the original roof.   We’ve replaced all the carpet, repainted and spruced everything up.  Then, around 2010 we added an addition to accommodate all the kids and grandkids.

Jim trimmed the trees out front to improve the view – we now get to regularly see deer, raccoons, all kinds of birds including bald eagles.  We added a boat house and extended the carport to include another tool shed.

We have most enjoyed all the family and friends who have come to visit.  We have some great memories from this place and we are making more.  Tori once told me that when we bought the lake house, we gave them another lifestyle.  That’s pretty great. 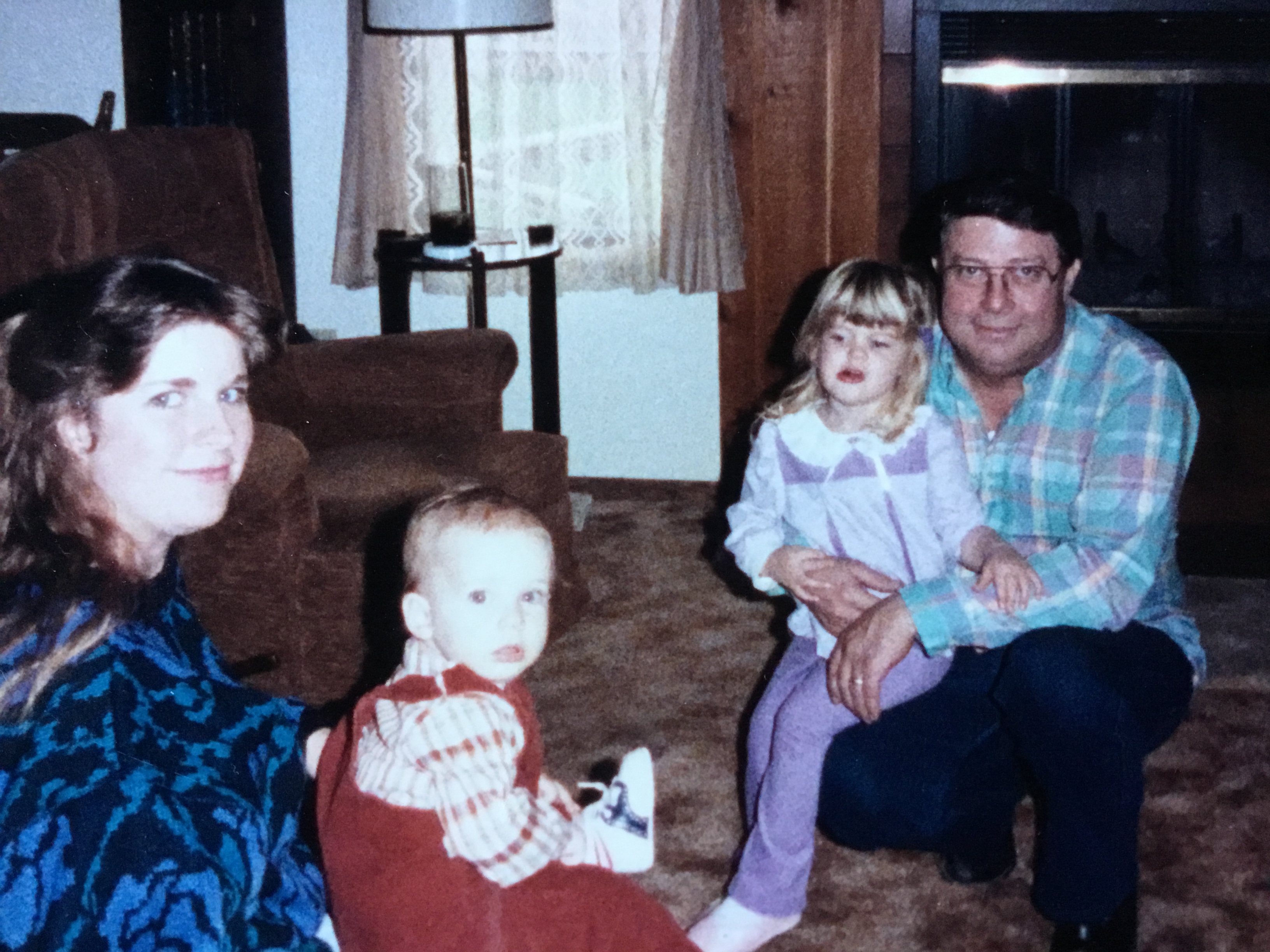 In 1985, Jim and I decided to move to Augusta, Kansas.  A newer neighborhood was developing on the north end of town.  Jim and I found a newer home there, across the street from a park.  It had a big basement for family get-togethers and a back yard perfect for a fish pond.

Jim got busy right away and hand dug the fish pond in the back yard.  It was three feet deep.  We brought in flat rocks to line the outside of the pond, and stocked it with coy and other attractive fish.  We both have a love of wildlife, but I don’t think we enjoyed it as much as the grandkids.  It was always the first place they would go when they would visit.

We put a pool table, ping pong table and a foosball table in the basement.  I think we hosted our and Donna’s extended families every Thanksgiving for eight years.  We have some great memories from that time.  We would always have pool, ping pong and foosball tournaments going on in addition to a whole lot of food and some great visiting and conversation.  Little Alex and Tori sang one year.  It was a great time.

I hope everyone has as great memories of that house and those times as we do. 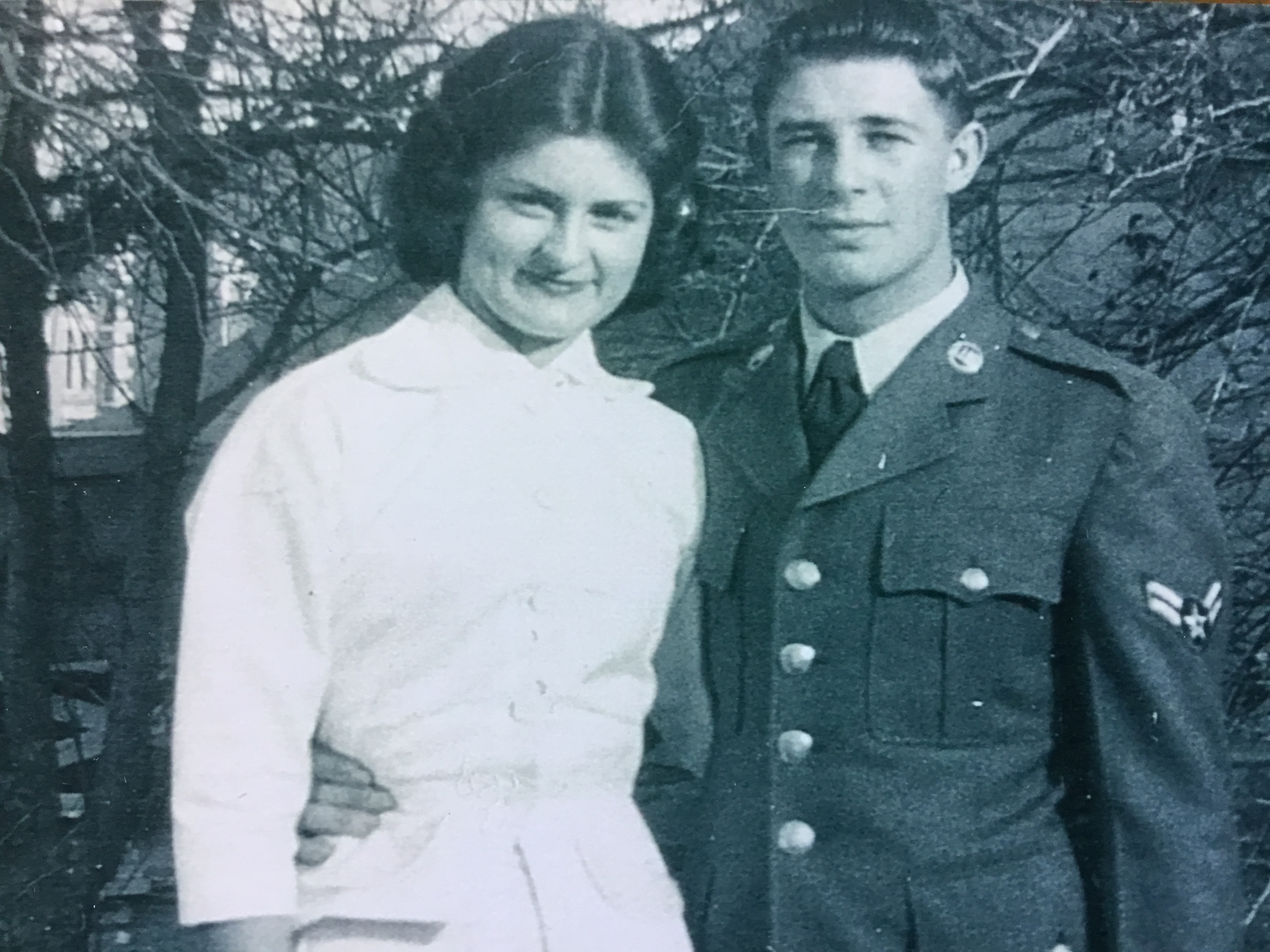 I bought the wedding dress in El Dorado a couple of weeks before the wedding.  I got it from the wedding section of the Montgomery Ward store on south main street.

Jim was home from the Air Force in New Mexico;  he had two weeks leave.  We got married by the judge in the courthouse in El Dorado.  I was seventeen, and Jim was twenty.

We were actually supposed to get married the day before, but the paperwork – blood test results, etc. – hadn’t come through yet, so we had to reschedule until the next day.  Jim’s mom had taken a couple of days off of work to attend the wedding, but she had to be at work the next day, so she wasn’t able to attend.

My mom was there, and my sister Donna’s husband Dale George was our witness.  Jim said, “We didn’t spend a lot on the wedding.  I think the only money we spent was what we paid to the judge.”

After the service, we took our picture on the courthouse front lawn, and went to Donna and Dale’s home for a while, then took my mom home.  We spent the night at the Kellogg Motel on Kellogg Street on the east side of Wichita.

We stayed at my parents’ home for a couple of days.  “I left the car for Pat to use to finish high school, and I took the bus to Garden City, Kansas, Jim said.  “I caught a ride with a friend back to New Mexico to the Air Force base.  I lived on base, so I could get by without a car until Pat joined me that summer.”